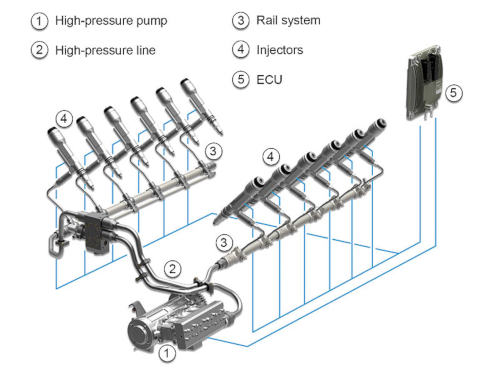 In spite of faithful service for more than a century, not all that long ago marine diesel engines' inherently bad manners had became nearly intolerable. Fuel injectors clatter-clatter-rattled. Exhaust was smokey and smelly enough to make some boaters seasick.

Then, just in time for the 21st century, innovative technology breathed new life into Rudolph Diesel's namesake. Thanks to Electronic Control Modules, common rail injection and sophisticated grey iron casting techniques, the iron age power got its groove back. Modern marine diesels are soft spoken, have given up smoking, boast miserly fuel sipping manners and are even more reliable than before.

How the born again diesel works its magic is as simple as the sea is salt. An onboard computer monitors throttle position, rpm, load, fuel temperature, ambient air temperature and a number of other critical variables. Armed with vital information, the ECM triggers an array of smart injectors that shoot fuel into the combustion chamber at the optimal moment and in the precise volume.

In the old days diesel fuel metering was mechanical and depended on engine rpm and the contour of the camshaft lobe that actuated the injector. But with the new electronic controls, injector timing, pulse duration, pressure progression and level can be varied. The obvious payoff is a customized, efficient fuel burn. 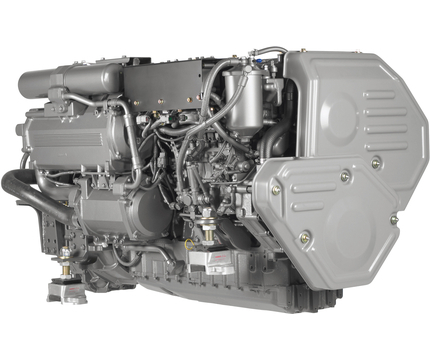 Yanmar Marine's 6LY3-ETP is a good example of a state of the art electronically governed inboard. Intercooled and turbocharged it squeezes maximum output out of a modestly-sized package. Rated 480 horsepower it's only about as big as an old school 300-horse. A month ago I spent a morning on Biscayne Bay, running a Regal rigged with the twin Yanmars. All the promises made in theory were proven true on the water. I was especially pleased with throttle response that accelerated the heavy boat so rapidly that in the seat of my pants it felt more like gas power than diesel. Its voice-print was subdued and there was nary a whiff of smoke.

Common rail motors, also electronically controlled, go one step further, mounting a big horizontal fuel tube along the top of the cylinder head, adjacent to the injectors. In essence, the tube is a fuel reservoir, a strategically mounted mini day tank. So when the throttle position sensor tells the injector to gush more diesel, plenty of fuel lies waiting in the wings. In sharp contrast, iron age diesels had to first pump fuel to the injector, then spray. Without a ready reserve, throttle response used to be less than crisp.

Another silicon age trick of the trade, instead of firing all of the fuel in a single shot, common rail pulses two or even three times. Instead of a big, whopping bang of combustion, the fuel and air mixture lights off more gradually. The flame front expands exponentially, smoothly. Instead of a hard jolt on the piston dome, there's a powerful shove. That annoying clatter, clatter rattle subsides and the engine runs smoother.

MTU builds a family of third generation common rail diesels. New are its 2000 M93 series V-12 and V-16 models rated 1800 and 2400 hp. That's a whopping 150 hp per cylinder. One secret of the German engineers success is the refinement of common rail components, including highly evolved ECM firmware and an awe inspiring turbo charging system that spools up to the nether regions of 85,000 rpm. There are three turbos in all. A single turbine spins at low speed. The second and third come to life at higher rpm. This sequential boost lends strong acceleration from idle through Wide Open Throttle. Not only are these 2000 series motors brutally powerful, they're lightweight and only about half the size of the competition. Compared to the previous generation of already efficient MTUs, fuel consumption measures six-percent less.

Last autumn, shortly after the Cannes boat show, I tested the MTU V-16 on a number of boats near Spezia, Italy. One was an Italian Customs and Immigration patrol boat on the lookout for illegal sub Saharan immigrants. The other was a refitted Mangusta 80 motor yacht. Once again, promises made on the drawing board were proven true on the water. Fast vessels both, acceleration was phenomenally strong. Smoke was virtually nonexistent. But what impressed me most was that even with nearly 5000-horsepower thrumming away beneath the cockpit sole, noise levels were comfortable.

Besides state of the art turbos, injectors and castings, modern marine diesels have also benefited from improved power trains, the gears, shafts and bearings that convert crankshaft revolutions into propeller thrust. Case in point is Volvo Penta's IPS which was introduced last last year. IPS replaces conventional inboard shafts and struts with an azi-pod. It's like a bronze stern drive protruding through the bottom of the hull, and with twin counter rotating propellers that face forward, not aft. At first blush, it seems the propellers and engine from a supersonic, cold war Russian bomber have been grafted onto the bottom of a boat. Fly-by-wire-steering azimuths the drive leg to port and starboard. Truth be told, twin, counter-rotating propellers first saw service on torpedoes and later in the 50’s on jumbo, turboprop airplanes.

Volvo IPS improvements to acceleration, top speed, fuel economy and handling are almost too good to be true. Results have been amply documented in past issues of Yachting. For 2006 IPS has been upgraded to include joystick control at slow speed. By simply twisting a knob, a novice helmsman can pirouette an IPS rigged motor yacht on its own axis. Docking maneuvers are made laughably easy, with precise control to all points of the compass. Strong current or a cross wind are not a problem. It takes so much stress out of docking that it could save a marriage.

Some say a little competition is a good thing. Enter Cummins MerCruiser Diesel and its new Zeus system. A direct competitor to the Volvo Penta IPS, Zeus also runs an Azi-pod drive. Only in this case the twin-counter rotating propellers face aft. Controlled by joystick, its handling manners at low speeds are equally precise. Tight quarters, wind and current are no problem. Novices look like 100-ton Masters. Available with either a 425- or 500-hp CMD diesel, and compared to conventional inboard installation, Zeus top speed climbs seven percent while fuel consumption drops 30.

Both CMD diesels are state of the art, soft speaking, hard charging motors. Zeus quiets their voices even further by mounting them on oversized pads that rather handily absorb vibration. Also, exhaust gas is flowed down and out through the propeller hubs. Such a configuration buries exhaust noise deep into the wake where you'll barely hear it.

Finally, Rudolph Diesels prototypes burned coal dust, tung oil before the inventor settled on distilled petroleum. Considering how far his wunderkind has evolved since, and especially in the past ten years has, makes me wonder what innovations will be revealed ten years from now. Who knows, maybe fuel economy will be so good after every voyage we'll have to siphon fuel out of the tanks.