A Cure For Low Octane Blues

Seems like every few years fate dumps a new disaster on us. The latest plague is anemic gasoline with octane so low that horsepower evaporates into thin air.

Water injection isn't new technology. Patents for one gadget or another date back to 1904. Various incarnations from years gone by include everything from World War II, P51 Mustang fighter planes to the sleek, new turbocharged Volvo cars. Water injection decreases an engine's octane requirement by 5- to 10-numbers. Just how much it's decreased depends on how much water shoots into the air horn. Research show a 5-percent water to 95-percent fuel and air ratio to be a good starting point.

Today's state-of-the-art systems inject a mist of water into the intake manifold or carburetor air horn, thereby reducing an engine's octane requirement. In other words, with WI, the engine doesn't need as high of an octane fuel. Gasoline octane isn't modified,per se, only the engine's need for a certain octane fuel. Water isn't shot into the engine continuously; the pump clicks on only when needed. How the individual systems perceive when the engine needs that boost is the major difference between units. The simplest devices have a sensor attached to the vacuum line, interpreting vacuum drop as a demand for water vapor. The more exotic gadgets use electronic black box technology to juxtapose vacuum and engine RPM in order to deliver the correct volume of water. For example, at eight-inches of vacuum and 2000 RPM, an engine needs a lower volume of water than it might at 8-inches of vacuum and 4500 RPM. 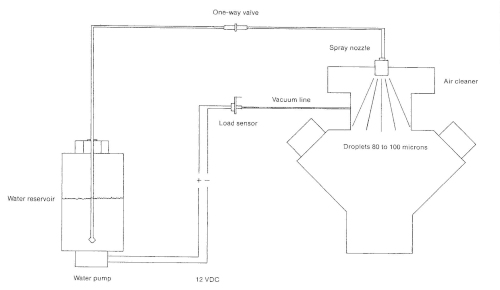 Consider a hypothetical, when vacuum drops to zero, as it does when the engine is killed, the water-injection pump could kick in, squirting water into the engine until the reservoir runs dry, and catastrophically filling the intake manifold and cylinders with water. Later, when the engine is cranked, the pistons try to compress incompressible water and the connecting rods bend into a pretzel shape. This is expensive and unnecessary. To prevent this problem, the better systems hardwire an oil-pressure switch in series with the WI pump. No RPM equates with no oil pressure and no volts to the pump. Disaster averted.

Some units require alcohol (methanol) to be blended with the water. The alcohol lightens the blend so the vacuum can more readily pick up the vapor. Usually, these are primitive devices that lean out the intake mixture and bleed in water. They are, in fact, not injection systems at all and we are unable to offer a recommendation in their behalf. However, it's important to know that in subfreezing weather, all WI units need alcohol dumped in the reservoir to prevent the water from icing up. Don't use antifreeze; it will wreck the engine. Isopropyl alcohol from the drugstore shelf works well, as does gas line de-icer. Mixing alcohol with injector water in a 50/50 blend increasses horsepower up to 5-percent and cures detonation.

Important to note: Alcohol increases horsepower, but at the same time, it also decreases mileage. So even for some hot weather applications, a water/alcohol blend might make sense. Some cheap units dribble a squirt gun-like stream into the intake flow. It works, albeit not as well as the units with precision, metered nozzles. Engineers tell us optimum results occur when the water is dispersed into the airflow in droplets ranging from 80- to 100-microns in size. The optimum flow for water injection is considered to be about 5-percent water to 95-percent air and fuel mixture.

With these generalities out of the way, let's look at the specifics of what WI offers today's cars, RVs and boats. WI's main appeal lies in detonation elimination. Detonation, or audible knock, can be decreased in two ways; either by increasing the octane range of the fuel, or by increasing the humidity of the intake air. Ever notice how engines seem to run better on wet days? This is Mother's Nature's own crude and unintentional form of WI. The best WI devices inject water during high-load periods passenger cars, this load is most likely to occur during acceleration, while towing a boat, or climbing a grade. Boats, however, present a different problem, since marine engines are under load the entire time a craft is under way In either application, WI works its magic by kicking in during load and lowering engine octane requirements, thereby reducing the tendency of the engine to knock. This can be a real blessing in the Caribbean, where the octane ratings of the local petrol are low and potentially damaging to your engine. WI solves this problem by decreasing the octane requirement of the engine by 5 to 10 numbers.

Recall earlier when we hinted at the possibility of some very desirable side effects? Besides saving engines from beating themselves to death, WI helps them last longer in other ways. Water injected into a piping-hot engine steam cleans pistons tops and the combustion chambet, eliminating dieseling and run -on. A number of government and private studies show a 78-percent reduction in crankcase oil acidity when running with WI. You probably already know oil never wears out, that it just becomes contaminated by combustion chamber blow-by and sludge. The resulting sulfuric acid reaction eats away crankshaft bearings, rod journals and cylinder walls. With WI, oil resists this scurrilous contamination and machined surfaces survive unscathed. Water injection minimizes acid build-up in crankcase oil, one of the main causes ofcrankshaft joourjnal and cuylinder wlal wear. Because of water's high latent-heat absorbing qualities, WI also functions as an internal coolant, making combustion a more efficient process. Combustion chamber temperatures are typically 20-degrees cooler, meaning lower temperatures and long life for exhaust valves.

The U.S. Army ran tests on water injection to see how much cooling it could provide. Simulating a bullet through the radiator, they shut off the flow of coolant to the radiator, cranked the WI wide open and ran a truck down the test path. The engine ran cool enough to get the truck home, although we don't recommend you run this test on any of your own vehicles. Overseas, both the United Kingdom and Kenya have tested WI. British postal service trucks report a 17-percent mileage boost. The Kenyan Ministry of Energy and the Kenyan Ministry of transportation both report 20-percent mileage gains Remember when we said that WI most benefits an engine when it is under load, and marine engines are always under load when a boat is moving. So, it would make sense, at least in theory, to equip a marine engine with WI. But do tests bear this theory out? 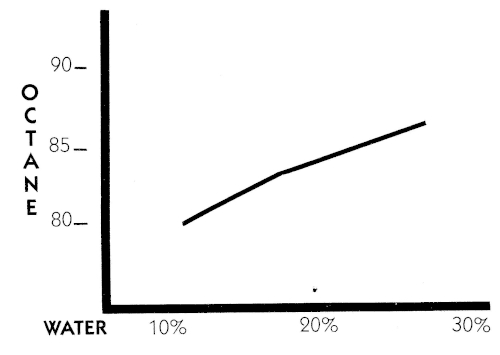 Test results have been obtained using a 24-foot Sea Ray cabin cruiser powered with a 250 cid, 6-cylinder engine. After installing WI and with the throttle wide open, we picked up 7 nautical miles per hour and 800 RPM on the top end. On a 90 mile run, the engine was operated for the first 45 miles with normal carburetion and on the second leg with WI. The engine used significantly less fuel on the return trip running on WI.

What about tow vehicles and the family car? We built a Ford 2.3 liter, high-compression engine. Puttering with ignition advance, octane, water injection and a ping sensor, we came to a firm conclusion. Water injection definitely stops engine knock and run-on after the ignition is switched off. Mileage boost depends most on the driver's stop and go habits, but nonetheless, we ran an average 8-percent mileage improvement. Beyond the boats and Mustang II engines already mentioned, we've run two-year's worth of WI tests on stern drives, tow cars and trucks.

Not surprising, those long term results mirror those we originally reported. To recapitulate, we found engines run ten- to twenty-degrees cooler when water injected . Most important, we were able to run low octane fuel in a 12.5 to 1 compression ratio engine when water injected. Without water injection we had to fiddle with octane boosters and retarding the spark. For comparison's sake, most engines boast between 8 to 1 and 10 to 1 compression ratios, easily within the range of a water injection cure. If you are considering a WI installation, most units will bolt onto an engine in just a few easy steps and do not require high compression pistons, turbo-charging or a racing camshaft.

Pick of the Pack

Pick of the pack is the Holley water/methanol system electronic water injection. It wins approval based on how it allows you to safely run on lower octane pump gas, the manufacturer's long standing reputation in the aftermarket market-place, as well as for the unit's common sense engineering. The price is also right. Interesting to note is the way that the solenoid flow has been characterized within the ECU. Program in an exact flow amount into the software, and that flow is injected into the engine, ensuring neither too little (causing engine damage), nor too much (causing a large loss in power) water/methanol mix is injected into the engine. Select the exact percentage of water/methanol mix to be delivered vs. the percentage of fuel flow present, at any RPM and load. This makes tuning a very simple and accurate process. All components are designed to be compatible with water/methanol mix of up to 50% methanol. The Water/Meth solenoids are run by an injector driver output. If an extra output is not available (as would be the case on a HP ECU driving 8 injectors), PN 554-115 can be purchased that can be driven by a low side PWM output.

There are old school, Water Injection kits around, like those offered by Holley Carburetor, and the Edelbrock Vara-Jection. Or, the Goodman Systems, one of the best WIs formerly available, now out of business. One may still find one of these vintage Water Injection kits on eBay, on the shelves or a performance shop, or at a garage sale. 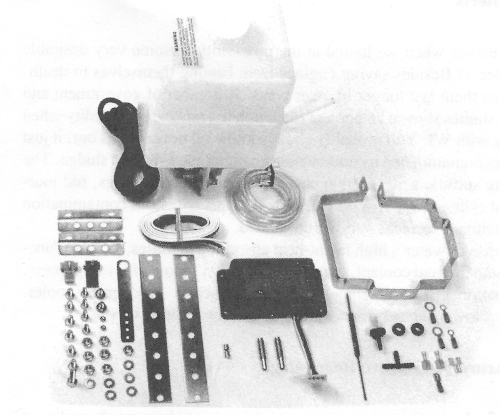 The vintage, Holley WI which consisted of a bolt on windshield wiper reservoir and electronic module is hard to find but dirt cheap and sells for about $25.

The vintage Edelbrock Vara Jection also shows up for sale. 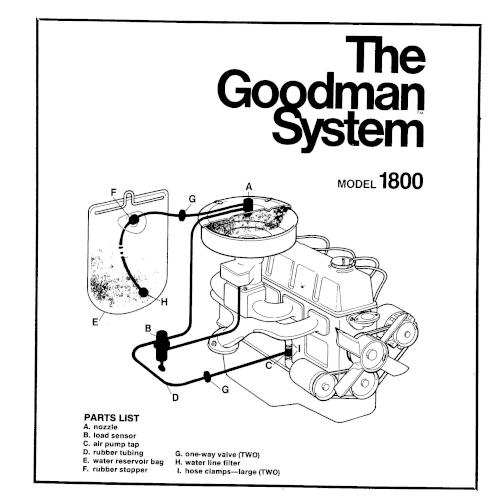 Yet, not matter whose brand is schedule for installation, a tune-up should be the first step in the process. Moreover, a tune-up should always begin with a cylinder compression test. Each cylinder must register within a few pounds of the others or it isn't even worth tuning the engine. With cylinders out of balance, an engine will never run right, and weak or intermittently firing cylinders handicap any water injection. 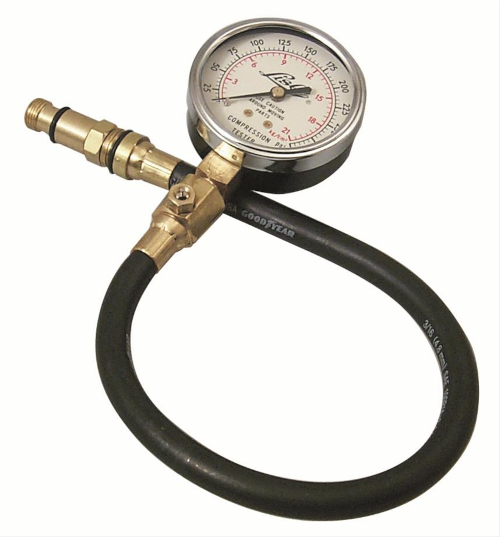 Once installed, WI will improve mileage. Note however, that disparities in mileage will always occur, Again, depending on whether the driver is a lead foot or light foot. But whether tow vehicle or marine engine, WI properly installed and metered will reduce the octane requirements of an engine and provide a cleaner running engine, on the piston tops and at the exhaust. You should know the big disadvantage of WI is that you have to fill the water reservoir when you top off the fuel tanks. And until that becomes a habit, you are prone to forget. Then comes the gentle reminder when the engine pings, and when you turn off the engine, it runs on. The cure is to simply fill the reservoir, preferably with distilled water so minerals don't clog up the injector nozzles. Should the nozzle ever clog, clean it like one of those automatic coffee makers, by dunking the nozzle in white vinegar to remove the scale. Consider this: If WI saves one-gallon of gasoline in twenty, and the trade off is a gallon of tap water and a modest investment, you can bet your crankshaft it's a wise investment.

One final note: Water Injection is legal for sale and use because it does not affect vehicle emissions and is not covered by emissions regulations.