How to use boat fuel treatments and additives

What Every Boater Needs To Know
About Boat Fuel Additives

Depending on how you handle it a boating season gas can either be plagued with problems or no problem at all. Here's what you need to know, to avoid problems along with a few tips on keeping your boat running strong all season long.

It's no secret alcohol-laced gasoline creates a boat load of problems including absorbing moisture out of the atmosphere. There's also the fact that E-5 through E-85 gasoline shelf-life is notoriously short. After about a month's time the petro-chemical begins to degrade into nasty gum and varnish that clogs up gas injectors and carburetor passages.

Common sense would be to avoid alcohol fuels altogether, by scouting out marinas that sell unadulterated gasoline. That said, it's understandable that trailer boaters are tempted to pull up to a land-based gas station to top off with the less-expensive road tax Regular gas. But whenever topping-0ff with automotive gas, before pumping a single gallon first dose the fuel tank with marine-specific stabilizer. And no matter what the brand name of the stabilizer, before you even open the can, slow down and take the time to read the label and follow its instructions to the letter. Know that in general, the greater the concentration of stabilizer - the grater the number of ounces added per gallon of gas - the longer the protection before the treated gasoline begins to turn sour. The label on the can tells how many ounces and how long the protection lasts. 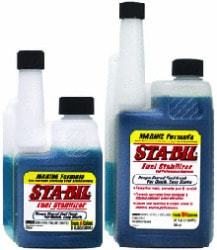 StarTron is a reputable product that I use. It's easy to spot on the shelf, it's blue like windshield washer fluid. Another contender is Sierra's eGuard , it too is blue, and Gold Eagle's Sta-Bil Marine Formula Fuel Stabilizer.

It's also important to know that alcohol gas burned within three weeks, with or without stabilizer, tends to be problem-free, for the same reasons a tow vehicle or family car won't have an issue with the stuff. That said, the passage of time is the enemy of E-10 and E-15. Figure on a shelf life of about three to four weeks before the gas rots and water seeps in.

Meanwhile, back at the waterfront know that some gas docks rather considerately treat their gasoline supplies with stabilizer (sometimes this means gas with alcohol - sometimes alcohol free) which means that when topping-off the fuel tank dockside you don't have to go to the trouble or expense of popping the top on your own chemicals.

No matter what the gas source one must-have accessory item on a powerboat is a gas/water separator. This holds true even on portable outboard motors rated from 2- to 30-horsepower. Costs for a portable outboard motor sized gas/water separator filter start at about $30 and replacement elements cost about $15. An element should last a whole season, or about 100 engine hours. 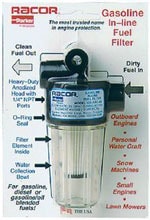 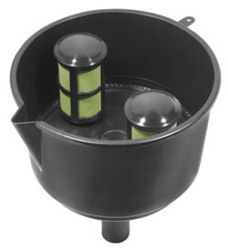 Also good to know, the filter element on these miniature water/separator/filters, is a tightly-woven, 10-micron mesh that keeps tiny bits of gum (decomposing gasoline) and other particulate matter from clogging up a small outboard motor's tiny main jet and passages.

Because alcohol is corrosive, it's pretty hard on all system components. Likely as not the day will come when you squeeze the gas primer bulb and watch in absolute horror as the contents of the bowl turn black in a swirling cloud of minuscule rubber particles. That the telltale sign that the primer bulb has rotted on the inside and stands poised to crack wide open and spill gas. Imagine what would have happened if the rotten rubber had flowed to the injectors or carburetor jets and you didn't have the foresight to install a filter. You may also find little yellow flecks of yellow plastic which are the broken down remains of the gas hose liner.

On larger, more powerful boats, with either gas or diesel engines, it's wise to have a competent cleansing system in place, one that begins at the gas dock. Consider pre-filtering, or pumping fuel into a screened gas filter jabbed into the fill tube. Its specially coated wide mesh screen keeps big junk out of the tank and also separates out free-standing water. The water drops down into a sump and is disposed of in an environmentally friendly manner. The first time you try one of these out you might be shocked at how filthy gas can be.

If your boat is diesel-powered you probably already know about the gas treatments that kill microbes, the living breathing organisms that would otherwise thrive in diesel. Kill them so they don't proliferate and damage the system. Once again, read the label and wear gloves to protect your skin. How to Solve
Alcohol Fuel Problems
in Boats

Fueling a motor boat, an electrical generator or a personal watercraft with ethanol isn't a problem when you know the secret to keeping the engine happy.

By now you already know that Ethanol-laced gasoline is notorious for causing big problems with outboard motors, stern drives and inboard engines. Whether or not it should ever put to sea is a moot point. Whether we like it or not, that's what's on the fuel docks. But the fact of the matter is that boat and personal watercraft owners need not suffer. In fact, millions of boaters burn E-10 without problems. Here's how to make this BioFuel work for you.

The author is a factory-trained marine mechanic and service manager who, as a contributing editor, wrote about marine engine technology and repairs for Motor Boating magazine for three decades as well as contributing stories to Popular Mechanics, and various Boating and Yachting magazines in the US, Australia, Singapore and Brazil. He has plied the trade in the Caribbean, Iowa, Arizona and California.