Perhaps you've noticed we're in the middle of an all out horsepower war, a fierce competition raging amongst engine companies intent upon building the biggest, most potent outboard motor. In 2006 Suzuki outboards broke the 300 horsepower mark with its introduction of a 4.0 liter 245 cubic inch V-6.

Truth be told, there have been other 300-horsepower outboard motors. But all of them are two-strokes. The first one was a loop charged Evinrude V-8 dating back to the mid 80s. A veritable giant, it's cowling top is broad enough to accommodate a patio table and chairs. This outboard motor is long obsolete. The second entry is Mercury Racing's 300 horse V-6 OptiMax. News of this direct injected creation came at the same time as the Suzuki DF 300. Predating the big Opti, was the Yamaha 300 HPDI, yet another Direct Injected outboard. Regardless, Suzuki getsa credit for building the world's first 300-horsepower, four-stroke outboard motor.

No big surprise, given it's four stroke genetic code, the Suzuki DF300 is heavier than a Direct Injected two-stroke, weighing about 100 pounds more than either the Mercury Racing OptiMax 300 XS, or the Yamaha HPDI 300. Don't misunderstand. It's not disproportionately larger. It's just that the powerhead includes components two-strokes don't have. Components like camshafts, intake and exhaust valves, and valve springs and more complicated cylinder head castings.

Suzuki V-6 cylinder heads are populated by 24 valves, four per cylinder. Even more tantalizing, they're actuated by Variable Valve Timing mechanism. VVT varies the opening of intake valves. The technical term is valve overlap, and you should know that increasing or decreasing overlap significantly benefits low and mid range torque curves.

The crankshaft is offset, positioned forward of the driveshaft. An intermediate gearset flows power between the two. The strategy: Moving the powerhead forward shifts the center of gravity forward, improving the boat's balance and directional stability. The gears multiply torque, even if it is just a little. Below the waterline the gearcase is streamlined, paying big dividends in faster acceleration and higher top speed.

An integral fuel filter insures only squeaky clean fuel pulses through the injectors. Fuel isn't just filtered and water separated out, a cooler chills gasoline for the simple reason the colder the fuel, the denser its mass and the more horsepower it delivers. A long track intake manifold pumps up low end torque. A large air induction plenum spreads out the power band for sharper throttle response from idle through wide-open throttle. A cowling heat shield prevents heat from raising up off the engine and warming intake air temperature. Air, just like fuel, builds more horsepower when it's cool. 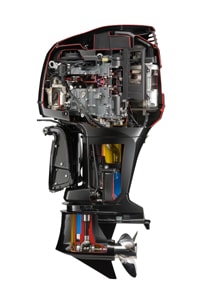 Studying a torn-down engine and visiting with engineers, I learned that maximum horsepower wasn't the only driving force in this engine's design. So too was reliability. DF300's pistons are forged, as opposed to merely hypereutectic or cast. The result of more expensive pistons is substantially stronger reciprocating mass and longer engine life. But there's a catch. Typical forged pistons rattle on start up, only quieting once the engine warms and the aluminum expands to more tightly fit the cylinder bore. During testing, I was pleased to hear a quiet engine from the first turn of the key. The reasons are as simple as the sea is salt, says Suzuki. Production tolerances are held uncharacteristically tight. So there piston fit snugly and don't have to expand. Also, piston skirts are coated with friction reducing resin that resists scoring. The piston dome is alumite-coated, a barrier that locks heat in the combustion chamber, forcing BTUs to build horsepower instead of escape. Without the barrier coat, heat would convect from the piston skirt to the cylinder walls and on into the coolant, taking horsepower and mileage with it.

Alumite is an important part of the horsepower building equation, in another, not so subtle way. Controlling combustion chamber heat allows adjusting the fuel to air mixture, valve timing and ignition timing right up to the ragged edged. So Suzuki engineers dial in maximum acceleration and higher horsepower without fear the engine will self destruct. There's more. Its Suzuki's proprietary multipoint sequential electronic fuel injection that allow this precise juxtaposing of combustion variables The burn is so precise the new motor has been certified as an ultra low emissions outboard, that meets both the EPAs 2006 emission standards and the rigid CARB standards.

Another nice touch is the potent alternator rated 54 amps. Even when loafing at lower rpm it generates a whopping 34 amps. Its voltage regulator is raw water cooled to dissipate heat and insure reliable battery charging. These things are vitally important for anyone who wants to power a full complement of Radar, VHF, chart plotter and stereo.

Besides raw, bloody horsepower, one of the Suzuki DF300s most endearing characteristic is digital, electronic Throttle and shift controls. Remember how early on we mentioned the fuel injection is electrically controlled to the nth degree? Digital engine controls allow Suzuki engineers to precisely advance or retard the throttle body by wire. Similarly, shifting actuators take their commands by wire. There are no words adequate to describe how sensitive the engine responds to even the slightest. movements of the throttle lever. It's not just horsepower at work, but lightning fast communication between your brain and the engine's.

A dash control panel synchronizes rpm on boats with either twin or triples. On a triple, the center engine is slaved to the port engine. Tachometer and speedometer are loaded with information, displayed in an LCD window below the needle and fascia. On the tachometer you see fuel consumption, engine temperature, voltage, engine hours and trim angle. In the unlikely event a component should ever go haywire, you be warned about over rev, overheat, low oil pressure, low battery and be reminded when it's time to change the crankcase oil and filter. On the speedometer you see boat speed, fuel level, water temperature, fuel consumption and depth of water under the keel.