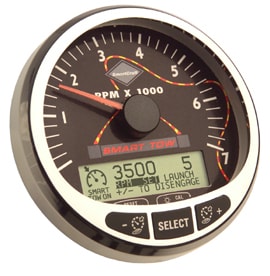 An Ingenious Melding of SmartCraft With Digital Throttle and Shift

Specifically engineered for ski boats, MerCruiser SmartTow solves the novice's problem of learning how to drive a ski boat with a constant, comfortable pull. Once engaged, Sea Tow accelerates the engine and maintains optimal rpm for smooth consistent launch and cruise control underway. There are five profiles to choose from, each parameter is specialized:


MerCruiser Sea Tow is similar to the resume function on a car's cruise control. Only instead of simply returning the boat to its previous speed, it controls the torque curve. The effect is that an accomplished wakeboarder feels like he or she is being pulled by an expert driver. The bottom line, SmartTow makes running a ski boat easier, for both experts and novices. Besides controlling launch and cruising speed, the gauge also displays a boatload of information, things like speed, depth, fuel flow, engine oil and temperature and trim angle.