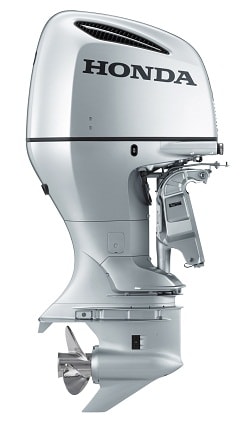 Shortly after its introduction in the Fall of 2011 the Honda 250-horsepower four-stroke won the IBEX Innovation Award for proprietary technology that maximizes horsepower at the same time it substantially reduces toxic exhaust emissions.

Honda BF250 is a high-performance 3.6 Liter outboard motor boasting an all-new gear case plus advancements derived from Honda's automotive engine line. For example, the BF250's reciprocating mass is based on the Honda Odyssey minivan V-6 engine. For marine duty its stroke was lengthened, increasing displacement from 3.5L to 3.6L.

Another trickle down technology, from automotive to marine, is Honda's Variable Valve Timing and Lift Electronic Control. Automotive aficionados may recall how VTEC debuted in the high-performance Acura NSX sports car. VTEC is renowned for the way it varies the lift and duration of the intake valve opening. It's like having a low end camshaft and a high-performance camshaft all in one. The payoff is optimal fuel economy and strong acceleration from rpm number one all the way up to Wide-Open-Throttle.

The good tech new gets even better. Honda BF250 also incorporates the Boosted Low Speed Torque System which advances ignition spark timing to within one degree of detonation during hard acceleration, creeping right up to the ragged edge of blowing up the engine. In tandem the engine control module tweaks injector timing. Honda BF250's Lean Burn Control automatically adjusts the air/fuel mixture according to speed and load at the same time it maximizes power. All these electronic controls pay big dividends by way of enviably good fuel economy and strong performance.

There is an adjustable idling-charge system. At idle speeds, when it senses demand for more amperage (SONAR, GPS, stereo, live wells and trolling motors) it automatically raises the engine speed by 100 rpm making an additional nine amps. 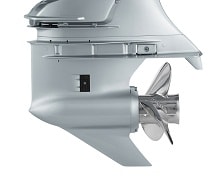 The gear case is especially hydro-dynamically efficient. Inside the casting we find needle bearing support for the forward-gear, a Rock of Gibraltar foundation that keeps it in rigid alignment with the pinion gear during maximum power output. Also, an improvement in gear tooth machining strengthens the surface of the teeth, which in turn, synergistically reduces misalignment. For the record, compared to the Honda BF225, the BF250's gear diameter mic's-out to be a robust 10-percent thicker and the tooth tip 38-percent thicker. The nickel-chrome-molybdenum steel alloy is super tough thanks to the removal of impurities. Finally, the Honda BF250 engine mounts on industry-standard centers so repowering twins is bolt-on easy.

The Honda BF250 outboard motor breathes via a direct air, dual circuit induction system that draws its breath via the front cowling, then circulates it around critical engine components all the while a top-mounted cooling fan blows cool air over the alternator Heat rises, up and out of the engine.

A second circuit flows cool air from the upper intake vents, removes latent moisture and then flows the dry, salt free air into the throttle body. This cooler, denser air packs a greater volume of oxygen into the combustion chamber. More oxygen equals more horsepower per turn of the crank. The variable air intake also boasts an oversize air-intake silencer replete with a special chamber that causes sound waves to interfere with one another thereby quieting intake noise.