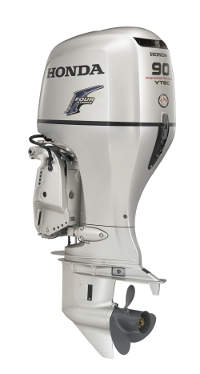 While the Honda Fit car engine is rated a more powerful 109-horsepower, it does not benefit from the sophisticated firmware that the outboard does. And it is onboard computing power and sensors as well as other tricks of the trade that allowed Honda Marine engineers to tool an outboard motor that melds brutal torque with enviably good fuel economy.

The future in marine engines lies with Electronic Control Modules and firmware subroutines that analyze an engine’s vital signs. An example is Lean Burn Control, Honda technology that adjusts the air to fuel ratio for either best mileage or maximum horsepower. It does this by monitoring the percentage of oxygen in the exhaust gas, which in turn reveals the air to fuel ratio in the combustion chamber. Since the ECM knows what happened in the last power stroke, thanks to Lean Burn Control, it can accurately adjust the air/fuel ratio. So Lean Burn Control leans the air to fuel ratio. The benchmark standard is 12.5 to 1. Honda leans the mixture it to a range from 14.5-to-one to as lean as 18-to-one. No big surprise, the payoff with a lean burn is superior fuel efficiency in the 2500 to 4000 rpm.

Low Speed Torque is another shining star. BLAST monitors the throttle, not only throttle position, but also how quickly the throttle lever advances. Under easy acceleration the BLAST algorithm advances ignition spark just a little. You get a little more torque. But jam the throttle forward and BLAST advances spark to its maximum number. Big ignition advance equals a boatload of torque, and very strong acceleration.

Variable Valve Timing and Lift Electronic Control incorporates both a street camshaft and a racing cam in the same engine. At lower rpm the street profile does its good work, lending strong acceleration. Above 5300 rpm the radical grind comes on line. The extra lift and duration, opens the valves wider and hold them open longer, allowing the engine to draw in big gulps of air and build maximum horsepower. 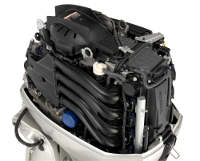 Two separate, individually controlled, cooling systems maintain uniform operating temperature. That means one cooling circuit and thermostat each, one for the block and another for the cylinder head. Running the cylinder head at a cooler temperature than the block allowed Honda engineers to dial in maximum horsepower without chancing catastrophic engine failure. Valve train longevity also increased. Finally, another nice touch is the potent 44-amp alternator which is nearly twice the output you'd expect to find on an outboard motor this size.

A look inside Honda Marine's, Hosoe, Japan, outboard motor factory where I watched BF75 and BF90s coming together on the assembly line

Marine Engine Technician Timothy Banse has published articles in Popular Mechanics, All Chevy, Pickup Van & 4-Wheel Drive, Mecanica Popular, Motor Boating, Yachting, Mar y Vela and many other magazines and newspapers from around the world. He writes about cars, trucks and tow vehicles as well as automotive- and marine-engine technology.