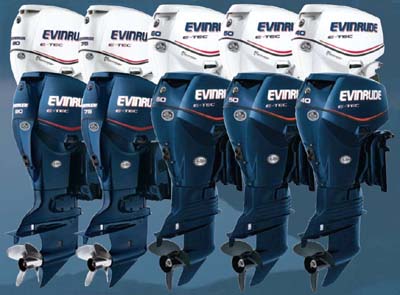 > At Evinrude's Stuart, Florida test facility I tested E-TEC motors rigged on a variety of boats ranging from a 16 to 34 feet.What I learned during the press briefing and on the water convinced me that with the introduction of the new Evinrudes, boating has just become easier.

While it's true the E-TEC engines are direct injected two-stroke outboard motors, they are not Ficht or for that matter even Ficht variations. Instead, E-TEC's method of direct injection is particularly uncomplicated and boasts fewer and smaller components.It is in a word, elegant. For example, the fuel injectors are founded upon the common Lorentz coil, the permanent magnet and coil winding that is the heart and soul of a loudspeaker.

A Lorentz coil is renowned for the way it can push and pull very quickly and for the way its strength and the direction of its pulse can be widely varied. That makes it ideal for spraying fuel into the combustion chamber at up to 600 psi. This precise control over the plume of fuel means engineers can make the engine do about anything they demand of it, from one hp at idle all the way to maximum output at wide open throttle. 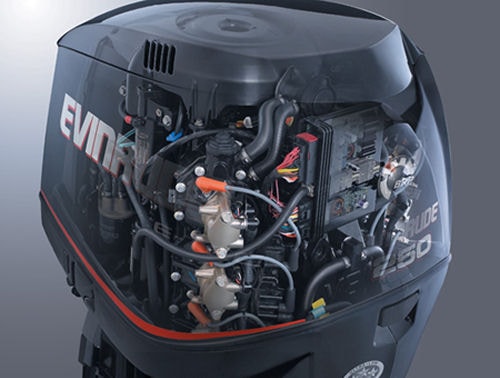 At low rpm, small droplets are sprayed directly over the spark plug and are ignited as a stratified charge. That lends the engine a smooth, clean idle, an essential operating characteristic when trolling. At higher rpm and horsepower, larger droplets cool the top of the piston. That builds maximum horsepower without wasting fuel. Beyond the theoretical, the E-TEC method of direct injection has also proven itself on the water. Throttle response is razor sharp. Naturally, these engines are also clean burning. Evinrude outboard motors meet the world's emissions requirements, including the stringent California Three Star certification (CARB).

Beyond performance and emissions compliance, the most compelling chapter in the E-TEC story relates to its enviable operating characteristics. They are user friendly. Unlike any other outboard motor to date, E-TEC outboards do not require a break-in period. So you don't have to baby them along at lower rpm for the first few hours running time. They're like a toaster. Take them out of the box, plug them in and go.

How Evinrude accomplished this feat is easy enough to understand. During manufacture, cylinder bores are precision machined meticulously straight and true. Next the bores are finished with a boron nitrite hone that amplifies surface porosity. Porosity retains oil like a sponge. The piston is also a NASA developed alloy that's three times stronger than conventional aluminum alloys. The slipperier surface, the precision machining and the special piston decrease initial wear to the point where break-in is unnecessary. For this reason Evrinrude eliminated the de rigueur 20-hour scheduled check-up. In fact, dealers don't need to see E-TEC motors until 300 engine hours, which for most boaters is about three boating seasons

Another user-friendly characteristic, lubricant is topped off only after about 300 hours operation. Gearcase oil, usually drained and refilled annually, can also be ignored until the 300-hour mark. During fall lay-up, E-TEC motors winterize themselves, with a routine initiated by the simple turn of the ignition key. Note, you should still treat the gasoline in the fuel tank with stabilizer in order to prevent it from turning sour, but you don't have to circulate the stabilized fuel thru the fuel lines to the engine. Because no air can enter the sealed fuel system, there is no oxygen present that could otherwise rot the fuel. The gas in the engine's fuel, filter, delivery rails and injectors stays fresh.

Unlike most other outboards, there is no throttle linkage requiring adjustment at tune up time. Sparkplugs are double platinum tipped for extreme long life. Both the water pump and gearcase proper are big motor parts, oversized for longevity. Any marine mechanic worth his salt will tell you a majority of his work is spent repairing water pumps and gearcases. With E-TECs robust components, mechanics will likely have more time on their hands. The powerhead is self-flushing, which mean silt and salt precipitate never have a chance to lodge in cooling passage nooks and crannies where they would otherwise cause hotspots. There are no alternator belts, timing belts or valve lifters to adjust.

You should also know E-TEC's electrical system is founded upon a lightning hot magneto that fires the ignition coils and also powers the fuel injectors and oil pump. In other words, the engine is not reliant upon a battery that might have died during winter storage. Obviously, a 40 hp E-TEC would be easier to rope start than the 90. By now it should be quite obvious that Evinrude engineers designed these engines to be as trouble-free as possible.

As for actual on the water operation, starting was instantaneous. There was no choke to fiddle with. Evinrude engineer, George Broughton, said the engine would start with one turn of the crankshaft even when it's been in storage. He was right. My test engine started and then ran without missing a beat, even though it was as cold as a stone. One second after I turned the key, I pushed the control lever into gear and eased out of the slip. There was no stumbling or stuttering. The cold engine was ready to go.

An engine oil reserve light blinks on when capacity drops to 25 percent, which calculates to about five hours running. Incredibly, if you run the oil reservoir bone dry, the engine can still provide power for five hours without damage. Evinrude offers three different blends of TCW-3 engine oil. The two standard blends cost about $20 a gallon with the new synthetic XD100 blend going for about $35 a gallon. Premium blend XD100 is recommended, but not mandatory, for these engines. Formulated with special additives for cleaner burning and lower consumption, XD100 burning E-TEC motors can be programmed by a dealer mechanic to use half the oil for an even cleaner exhaust and also save money.

With the E-TEC outboard motor running, there was no smoke, not at idle, or at any rpm on the way up to WOT. The reason for the clean burn is because no oil is mixed with the gas. During its design, engineers targeted oil delivery to critical components, such as crankshaft roller bearings and piston skirts. So the engine gets a precise dosage of lubricant exactly where it's needed. Average users will only burn about two or three quarts of oil per year.

Acceleration was strong, as expected from a two-stroke, with the direct injection E-TEC giving the outboard motor a definite edge over a conventional two-stroke. The engine I tested was nearly new with only a couple of hours logged. Once again, because these engines do not require break-in, I was able to aggressively accelerate from idle thru mid range, to wide-open throttle and sustain high rpm.

Fuel economy proved exemplary on an 18-foot center console boat with nearly 12 mpg at trolling speeds and about five mpg at top speed. For details see the accompanying chart. During testing it was impossible to get sound readings due to 30+ mph winds masking the engine sounds at all speeds. Nearby lightning strikes also encouraged me to take shelter. That said, the engines tonal qualities and loudness were impressive. It's a direct injected outboard motor with a voice so pleasant I could listen to it all day long. Thanks to the three dimension acoustic enhancer and air silencer, three was no characteristic two-stroke twang. Neither was there even a hint of rumble or piston clatter. Instead there was just the quiet resonant voice of fuel-efficient horsepower.

Because E-TEC outboards are two strokes, they weigh considerably less than four-strokes A less dramatic characteristic is the way the cowl latches are positioned on port and starboard sides of the engine. I liked that setup for accessing the engine both while in the boat rocking and rolling in the wave, and from the transom side when the boat is sitting on a trailer. Finally, the warranty term runs for three years.