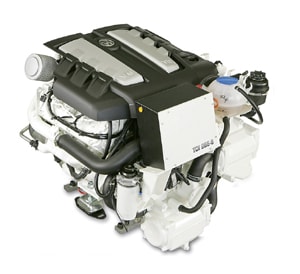 Cummins MerCruiser Diesel, a supplier of marine propulsion solutions, and Volkswagen have concluded a partnership agreement to develop and supply marine diesel engines that will comply with pending Tier 3 emissions standard. Volkswagen, a leading manufacturer of diesel marine engines with a maximum rating of 350 horsepower, will build a new generation of marine diesel engines at its plant in Salzgitter, Germany. Said engines will bring reduced noise and vibration, a smaller footprint, lower weight and more affordable price. All Volkswagen marine engines built from 2011 on will be exclusively supplied to CMD and marketed under the CMD brand name. Restated for clarity, this agreement is for marine diesel engines displacing 5.0 liters and below.

The Tier 3 emissions standard comes into effect in the United States in 2012, with the corresponding European standards following in 2014. Tier 3 mandates significantly lower thresholds for emissions of nitrogen oxides (NOx) and other pollutants, which naturally it follows, requires the further development of diesel combustion technology. Enter VW, its engineers and emissions laboratory. Based in Charleston, South Carolina, Cummins MerCruiser Diesel offers a broad range of marine diesel engines ranging from 115- to 715-horsepower for recreational applications, and 76- to 715-horsepower for commercial use.