Caterpillar engineers have been burning the proverbial midnight oil researching how to burn alternative fuel in marine diesels.

Caterpillar engineers have been burning the proverbial midnight oil researching how to burn alternative fuel in marine diesels. Doubtlessly you’ve noticed how over the past few years diesel prices have skyrocketed. For example, the cost per liter in Europe doubled between 2003 and 2005. Along with the bad there is some good news. Salvation may be found by burning alternative fuels like B30 Biodiesel, which is a blend of 30 % Biodiesel and 70% regular mineral diesel.

Compared to conventional mineral diesel fuel refined from Brent light or Arabian sweet crude, Biodiesel boasts a higher cetane rating. Cetane is to diesel what octane is to gas. A number that refers its quality. Another plus. Biodiesel burns cleaner. So engines run more smoothly and without that characteristic loud clatter of a diesel motor. Cold weather performance is not a problem.

On the environmental side of the balance sheet burning Biodiesel substantially reduces toxic exhaust emissions into the air: Nasty things like unburned hydrocarbons, carbon monoxide and particulate matter. And because it contains naturally occurring oxygen, Biodiesel burns more completely, all but eliminating the cloud of black smoke associated with diesel engines. Because Biodiesel is produced from vegetable oil, greenhouse gas emissions created in the combustion chamber are counter- balanced by the amount of greenhouse gas absorbed from the air above the cultivated fields where the vegetables were grown in the first place. With all these things going for it, it should come as no big surprise to learn experts agree Biodiesel blends are better for the environment.

Then are also certain financial benefits. Depending on when and where the locale fuel dock is situated, boaters could potentially save up 50% of their fuel bill with B30. After the 2008 tax increases on regular diesel in the UK, Biodiesel is expected to be available at the price of regular diesel.

That’s the theory, at least. To test the hypothesis Caterpillar Marine and Horizon powered a 20 meter motor yacht with twin Cat® C18 engines running on, you guessed it: B30 Biodiesel. Neither the boat nor the engine received any modifications. For the record, the electronically-controlled C18s displace 18.1 Liters and are rated 1000 horsepower at 2300 rpm. Also important, this six-cylinder block boasts an enviable reputation for durability and low emissions even with mineral based diesel fuel.

Fuel was pre blended before topping off the Horizon tanks. Pre-blending insured fuel flowing to the twin engines was B30 at all times. Consistency matters when trying to prove a point by scientific method. After logging considerable hours touring the coast of Southern England test results showed the C18 Biodiesel engines performed identically with conventional mineral diesel. Which is to say the motors ran reliability were fuel efficient and the exhaust was virtually smokeless. Neither was smoke visible when starting cold engines. Best top speed with both the conventional and the B30 Biodiesel fuels was 24.4 knots.

According to a Caterpillar Marine spokesperson, most of its existing marine diesel engines are capable of burning up to 30% of Biodiesel without modification. Although the condition of seals and hoses made of elastomers on older engines should be monitored regularly because some of the fuel additives can cause them damage. Newer components don’t suffer that malady.and shorter fuel filter change intervals. Consult your local dealership for guidance.

When burning B30, the Cat C18s require the same maintenance intervals as engines burning regular marine diesel. In other words, standard maintenance procedures are required either once per year, every 250-service hours or about every 3500-gallons of fuel consumed, whichever comes first. Other Biodiesel blends exist, such as B20 which is popular in the United States. Depending on the particular Biodiesel blend, Cat marine diesel engines may require shorter oil change intervals.

With its headquarters located in Hamburg, Germany and a service network numbering more than 2,100 dealer locations worldwide, the Cat product line offers main propulsion engines from 93- to 7,200-kW, auxiliary engines from 162- to 5,420-kWe, and generator sets from 11- to 5,200-kWe. 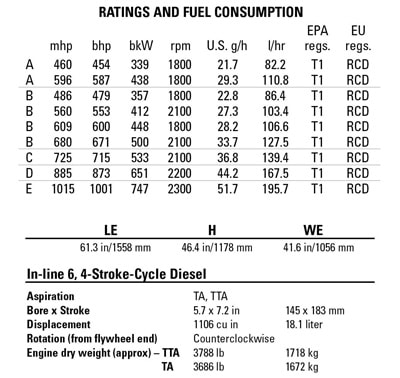