An Overview of the General Motors Vortec 6000 Marine Engine 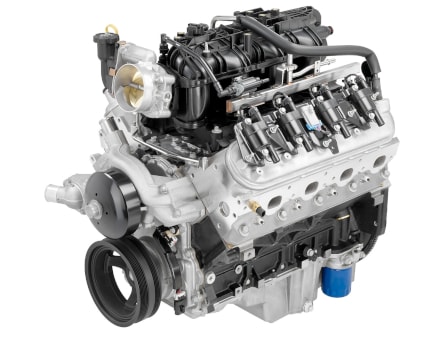 All the major player soffer their own marinized versions of the General Motors Vortec 6000, including Indmar, Flagship, Volvo Penta, MerCruiser, Crusader and Pleasurecraft Marine.

Not all that long ago offshore of Miami Beach we ran the Vortec 6000 in a showcase installation: twin, race-prepped, 600-hp Vortecs mated to MerCruiser Bravo One XR drives in the back of a Fountain 35 Lightning race boat.These fire-breathing motors took the Fountain well over 100 mph. With that in mind, let's look at the production version.

The 6.0L Vortec engine was first introduced in 1999 and versions of it exist today. It's renowned for its power and performance in heavy load, so it come as no big surprise to learn it's also known for high fuel consumption. That said, boat owners are generally pleased with L96's performance and durability.

The Vortec 6000 has a deep-skirt cast-iron block, replete with six-bolt main-bearing caps, which means it stays locked in placeVortec cylinder heads are aluminum-a set of castings shared with the potent LS6 Corvette engine. In a marine application, alloy castings pay big dividends by way of lighter weight and optimal heat displacement. The engine is easier to cool, which extends intervals between overhauls and allows engineers to dial in greater ignition advance for higher horsepower.

A new firing order dampens stress to the crankshaft by a full seven percent for longer life. Horsepower is also gained from the symmetrical intake manifold whose intake runners are of equal length. Each cylinder receives an equal charge of fuel and air, so the engine runs smoother and more powerfully.

Because the intake is composite, it's corrosion-resistant. Environmentalists will appreciate the Vortec's PCV system (positive crankcase ventilation). It's similar to systems on cars in that it recirculates crankcase emissions through the combustion chamber rather than venting them to the atmosphere.